Today we focus on a very unusual expert advisor -- the GPS Forex Robot, developed by Mark Larsen and his team.
Now, whatever I'm going to say in the next lines would not matter to those who have heard of Larsen before. Every time a forum participant mentions his name, it's generally followed by a narrative of ruined accounts, neglected refunds and crappy software.

Still, I believe it is worth exploring this GPS Forex Robot  even for the sake of developing a habit of digging deeper into complex matters -- things that look bright and shiny on the surface, but are spoiled on the inside.

Let us start with the fundamentals.

The developers of the GPS Forex Robot (version 2) offer it for sale for $149, plus there is a 60-day money back guarantee. So far so good -- for this price, we might expect the expert advisor to match the performance of the Forex Growth Bot, or FGB, which costs $129, and the Forex Invest Bot, or FIB,- $197.

The cheesy website promotes the GPS Forex Robot as a true miracle maker. As soon as you apply it to a Metatrader 4 (MT4) account, you will just have to wait for the miracle of 98% winning trades to take place. If that looks too good to be true, that's probably because it isn't.

But let us examine the block-buster claims further. According to Larsen, a reverse strategy allows fast compensation for losses incurred. Say the robot buys EURUSD and suffers a loss. As a result, it will immediately open a reverse trade (market ) -- a strategy called stop-and-reverse. In fact, that's something quite simple to implement in a software -- even by novices -- so there goes the"genius" of the two developers (Ronald and Antony) accountable for the bot.

To me, this looks like a Martingale strategy, which is a gaming method, in which you start with a certain bet size, then double it every time you lose and keep doing so until you win, when you return to the original bet size. What's dangerous about this strategy is that it can guarantee certain profits only to gamblers with boundless wealth and there's absolutely no limit on the maximum bet you can make. But if your wealth is limited, which usually is the case with forex trading, or there's a maximum amount you can exchange (again -- the situation with trading), then you might end up buried under the burden of continuously rising bets without an actual possibility to return your losses. That is to say, if you lose more than once, your accounts will most likely fail.

Let us explore the backtests to see how the peculiar strategy of GPS Forex Robot works.

At a first glance, the picture is rosy, as this incredible robot makes drives an initial deposit of $10,000 to a net profit of $100,952. The relative drawdown is at 20%, which is an acceptable risk level. Adding to the sequence of positive information, profit trades (89%) outnumber the losing trades (11%). Pay attention, however, the average profit trade ($219) lags behind the average loss trade ($824)! That is troublesome because a series of losses can get you into a very deep trouble.
The history of transactions is really enlightening, as you can see the odd trading strategy of the robot in action. For example, on May 27, 2009 there's a heavy loss of $919 after buying 1 lot of EURUSD. The robot immediately reverses the strategy and opens a market trade but with trade contract dimensions of 6.8. This time it's a winner -- there's a gain of $904, but such profitable trades cannot be guaranteed.

A real account on Myfxbook.com, to which the GPS Forex Robot is applied, provides us with additional insight concerning this EA. The trade is with EURUSD and started on May 21, 2012. Since its activation, the account has registered a gain of 153%, which, given the first deposit of $100,000, represents a whopping sum.

The account has not registered a single month of losses since its launch, even though the growth rate is gradually declining.

A worrying sign is that typical pips per trade are in 4.6, which hints in vulnerability to changes in market behavior. By contrast, FIB's Synergy FX account enjoys average pips per trade ratio of 13.6, while the ratio stands at 6.6 for FGB's accounts with ThinkForex.

The risk is low, but since drawdown is at a good level of 10%, the same as that of FIB and much lower (which is very good thing) compared to 42% recorded by FGB's account.

The curious part is from the history of transactions as once again we experience the stop-and-reverse strategy and the specific version of the Martingale method. The robot applies both approaches when there are especially heavy losses. By way of example, following a losing trade (the loss is $10,230) on June 8, 2012, the robot reverses the strategy and raises the trade contract size from 11 a lot to 75 lots. In the event the robot had suffered another loss like the preceding one, but with the increased trade contract size, the whole loss would have amounted to $71,088. Imagine what could have happened after a series of 6 or 7 losses, or even 20!

If you are acquainted with Isaac Asimov's work, you should know that the First Law of Robotics -- that is, a robot cannot harm a human being. Well, the GPS Forex Robot clearly violates this law. It may be not harming the dealers, but it is harming their accounts. It is similar to the Rosemary's baby sleeping in the cradle of loss. You just don't know when the baby is going to wake up and unleash hell.

The funniest thing is that Mark Larsen appears not to care at all about the strategy used by the GPS Forex Robot. In actuality, he's the only person to have rated this EA with five stars, in his own review of the program. Way to go, Larsen! Even if that's the best way to hell. 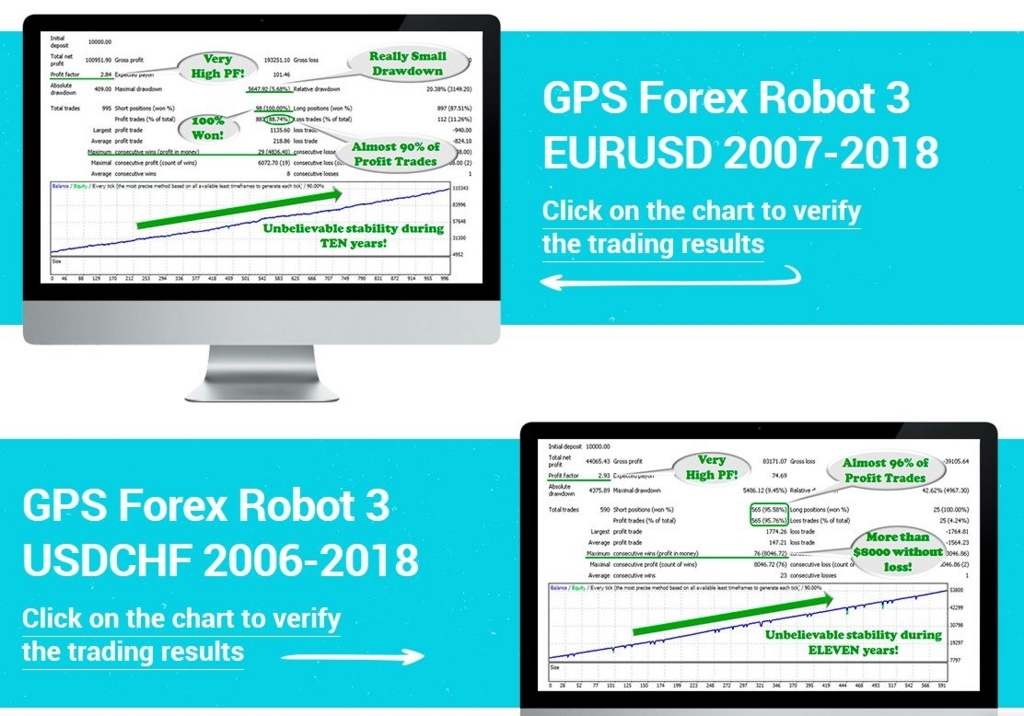 Expert advisor (EA) -- An algorithmic trading system for the MetaTrader system; a trading robot. EA's can either be downloaded at no cost or for a fee, or can be programmed in the MQL programming language.

Backtesting -- Testing a trading strategy on past time intervals through a simulation.

Pip - The fourth digit after the decimal indication of a price quote. For example: if the EUR/USD moves from
1.3350 into 1.3351, that is one pip. Pips are utilised to measure price movement, profit and slippage.